I haven’t spoken to him in 5 weeks, I’d felt pretty calm mainly then suddenly tonight I saw he’d reactivated his Facebook account. I’ve been so panicky since and I don’t know why it’s like I feel better knowing he’s disappeared. More calm or something. He didn’t even say goodbye just stopped talking 5 weeks ago and said he’d be off social media for at least a year and he was only coming back to the internet for me. Well he came back we’re not friends on anything so it definitely wasn’t for me because I haven’t heard anything. I’d just started to feel a bit more ok.

He asked me to be his September 20th 2008. We hadn’t met yet had just been texting he was already telling me he loved me that should of been the first warning there but I’d never felt like I matter my whole life till then. Anyway we met September 30th. It was lovely he was lovely and cheeky and made me feel like I was beautiful which I’d never felt. We where together for 3 months although he would never answer his phone and see me rarely in the end he was just full on avoiding me. He even hooked up with my best mate while I was in the room. Should of known how little he cared about me then.

After we split we continued to sleep together. He’d disappear for months and then randomly message that he missed me and I’d go see him we’d sleep together (by sleep together I mean hook up in public places) I now know because he had a girlfriend -Sarah giddins. An unattractive psycho bitch that got pregnant within about 5 minutes of them being together. Of course he didn’t tell me about her or the kid in fact he denied it for at least a year till I saw it all on Facebook. Naturally I told her all about me. I put myself in hospital that night and was there for 3 days.

He knew something had happened when he returned a week later after everyone I know wanting to kill him. It was mostly because I never saw anyone and was incredibly lonely and he’s all I had which he prays on, he makes sure I know it.

I moved to London September 2010 I wasn’t feeling to bad about myself for the first few months because I’d met other guys and hooked up obviously he didn’t like this and started telling me he loved me because he didn’t want me but didn’t want anyone else to either. I continued to have my fun got really into drugs -Coke and weed mainly but also ketamine and MDMA. Probably the reason for my confidence.

The following year he’d be telling me I was fat as fuck and calling me all these names (at the time I was very overweight) but someone that was supposed to care about you should never be so cruel. He even threatened to kick the shit into me once. He’d also continue to disappear and return I remember crying myself to sleep on a mates bed.

Late 2011 I met a guy who I quite liked actually we met on a night out and hooked up but ended up seeing each other for 3 months before he stopped talking to me over night and was with someone else -but that’s another story lol. During this time he would tell me he wanted to see me and we could spend every day together when his girlfriends at work obviously I was seeing what was happening with the other guy but that offer was no longer on the table when he wasn’t on the scene.

In April 2012 I got pregnant I was only 6 and a half weeks when I miscarried all alone I still remember it like it was yesterday worst day of my life. Sat alone in a&e crying my eyes out on a Friday night. He hardest thing I’ve ever had to move on from. He really didn’t care though I think he was relieved. He’d told me previously to get rid of the child. I couldn’t.

Beginning of 2013 at my biggest my confidence really went and every time I went out it was like i wanted to go home A lot of the time I did so just that. I’d freak out at the thought of anyone seeing me with no clothes on except him. The cutting started.

We continued to see each other till November 2013 it had been after 5 years things got nasty and I told his girlfriend he’d still been up to no good all while I was supposed to be having the time of my life in South Africa. I overdosed very badly I was walking like I was drunk I could barely stand but I vomited and went to sleep. Nobody to this day knows about that but him.

We didn’t talk for over a year in January 2015 I signed into my old email account and there was a message which I regretfully replied to. He kept telling me till August it was just sex and how there where no feelings like he wanted to drill it in. He knew I was cutting he knew how mucked up I was suddenly started acting like he was falling again we’d meet up and cuddle it was all different this time it was like he was my best friend it was like like I could talk to him about anything I really thought he cared. When he started being all cute I was very wary and it scared me but I wanted to believe it. He then asked what I was getting him for Christmas and I ended up getting him something really expensive. We continued to be close and meet up and things felt so nice I felt special he made out we where gonna have a future when his kids where a bit older (he now had another which he had when we weren’t talking) he’d ask how I saw our future he must of had a real laugh when I told him what I wished for. Things changed once he’d got his present tho he didn’t see me for months claiming he was busy but still made out a bit there where feelings there.  We met up in a hotel and for the first time it felt like we’d made love and not just banged it had felt a lot more special but maybe that’s just the way he wanted it to seem. I saw him the following day but he was very distant. I’d see him tell girls how beautiful they where on Facebook one even started putting hearts on his pictures which I saw the day after he’d been with me which I later found out he’d been seeing her he asked for a threesome which he’d always wanted I said no and he got so mad kinda like he’d made effort for nothing. That girl didn’t last long after she discovered his girlfriend after she went on one date and googled him haha. I was just happy that girl was gone. Me and him had a date day and spent a good 3 hours together. We couldn’t go cinema because there was nothing on by time we got there we where smack in between times. We said we would the following week, he promised.

Suddenly a few days later he was ending us completely making up bull about why we weren’t going to have anything anymore and weren’t even going to see each other and that he wasn’t going to talk to anyone he’d ever been with anymore but no I soon discovered it was just me. Before we ended he’d even given my a massive list of what I’d need to act like and look like for him to only want me. Things included getting a boob job, bum implants, dying my hair ginger. No wonder I found food again and started to gain weight I was so unhappy with myself.

Lasted a few months before we hooked up again and again after begging me coz he said he missed me. He made promises we’d spend my birthday together like we had the year before but 2 days before he suddenly couldn’t and made out it was my fault. I spent my 29th birthday alone crying only my room.

A few months later I was due to go see him I went from Cardiff to London and waited in the pouring rain for an hour and he didn’t turn up. At this point I was also bulimic. After gaining back a stone of the 6 stone I lost. He was still fucking with me knowing I was even more fucked up. In fact when I told him I was bulimic he basically said he didn’t even want to be my friend anymore and to get in touch when I’m fine. No support just enjoyed making me feel worse and things about him. We did continue to talk but only because he’s scared of me saying anything and him losing everything. The amount of times he accuses me of things when I haven’t said anything in fact he was the one that made a threat against my family which both my parents are really ill.

Then 5 weeks ago he disappeared didn’t say goodbye after 8 years, wanted me to tell him I love him as he gets off in it makes out he’s not going to have internet for a while and that he’ll message me when he can and that he’ll be off social media for at least a year and will only come back to the internet for me until today he came back and it certainly wasn’t for me.

Because of this mans years of emotional abuse which I don’t expect anyone to understand why I stuck around I don’t even myself but they have a way of getting you to stay don’t they abusers till there done with you and then just discard you. I’ve realised he’s a sociopath, everything for personal gain and doesn’t care what happens to anyone else. He has things in his head about us his own way of seeing times we’ve not been talking or things have happened where he Blaims me and said I just stop talking to him like it’s odd none of this happened he just has his own scenarios in his head. He tells girls he loves them to get them to do what he wants and if you’re not doing the things he wants or don’t feel like sending him that nude he’ll go distant with you like he wants to punish you. He doesn’t see the pain he causes anyone and doesn’t care even his girlfriend and kids he just doesn’t truely care about anyone because he can’t.

I apologise for writing a bunch of stuff people on here don’t care to read but it helps me you see in a world where I have no where or no one to express the amount of fucked up I am.

I’m not sure I’m ever going to be ok I think I’m well and truely mucked up for life now…. 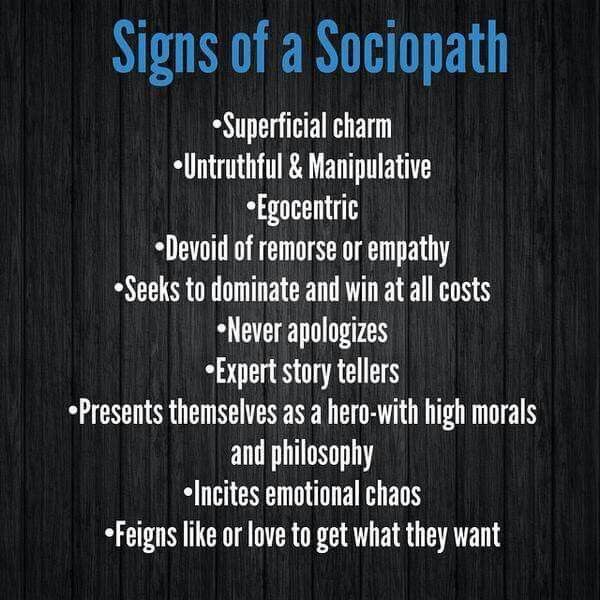